When a bird flies into your home 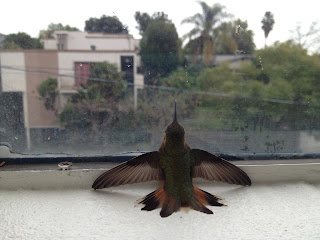 Interior designers have popularized the notion of bringing the outside in. Folding and disappearing doors can create a seamless transition to the great outdoors. The connection to nature adds a sense of calm and serenity to the home, they say.

But what happens when the connection gets a little too close and nature actually comes inside?

Tony Capparelli recalled the day nature flew in. He and his wife, Pam, had enjoyed a warm day in the backyard of their Lake Forest home. The family room doors had been open for several hours. When it got close to sunset, they went inside. That’s when Pam heard a noise in their second-story master bedroom. She discovered a hummingbird frantically flying around the room. Neither of them had seen it fly in, so they were unsure how long it had been in the house.

“The poor thing was bouncing off the walls and ceiling,” he said. “We were afraid it was going to hurt itself.”

When it finally landed on the ceiling fan, he could see it was a juvenile Anna’s hummingbird and decided to name it Wrongway.

They opened the door to the balcony, hoping the little bird would go out on its own. When it stubbornly stayed put, they attempted to coax it out of the house by hanging a hummingbird feeder on the curtain rod over the door.

“But the bird was having none of it and it was getting way too dark,” he said. “It was clear, Wrongway was going to have to stay the night in the Capparelli B&B for wayward hummingbirds.”

The couple found it necessary to keep the room completely dark until morning. Even the smallest light from a cell phone would agitate the bird, he said. Early the next morning, he opened the door. Wrongway flew to the feeder and drank without lifting its head for minutes not seconds, he said. Then it buzzed out the door.

Not all situations like this have a happy ending for the bird.

“Often people panic,” said Starlyn Howard, a volunteer with the International Bird Rescue in San Pedro and the Songbird Care and Education Center in Fountain Valley. When people scream, flail their arms and chase the bird around, it stresses the bird, she said.

“And birds can die from stress.”

When a bird gets into the house, the easiest solution is to lower window shades and close the curtains. Then open a door to the outside. “Birds will naturally go to the light,” she said.

Sometimes it helps to hold up a sheet with another person to create a wall to the rest of the home. Walking together toward an open door with the sheet held high, can help coax the bird out.

Without food, a trapped hummingbird can end up on the floor or windowsill completely exhausted. If a bird is injured or exhausted to the point where it can no longer fly, it needs to be taken to a rehabilitator. Call the nearest wildlife rehabilitation center or animal control services for instructions.

“Keep the bird warm, dark and quiet,” she said. A small box or paper bag with ventilation works to contain it. Use paper towels, instead of cloth, as a liner. Little toes can get caught on terrycloth loops, she said.

Rescuing birds of prey requires the assistance of animal control. “They’re not the easiest thing to catch,” said John Welsh, spokesman for Riverside County Animal Services. “And people will get hurt by their sharp talons.”

He recalled an incident where officers were called out to assist homeowners who heard pecking on the glass fireplace doors in their living room. Using a flashlight, they had discovered the wide eyes of a great-horned owl looking back at them. It had been pecking on the glass like an SOS. Animal services were able to rescue the owl. It was taken to a rehabilitation facility and later released.

Calls about birds getting trapped in chimneys is common, he said. It’s completely preventable by having a chimney cap installed.

As for Wrongway, the little bird may be gone, but he’s not forgotten.

“I sort of miss the little guy,” said Capparelli.

Posted by The Backyard Birder at 2:50 PM 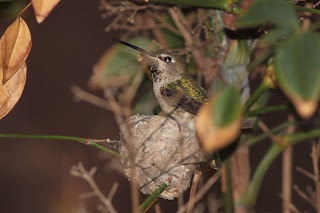