It's not yet spring, but nesting has begun!


A pair of Bewick's wrens have returned to nest on our patio again this year. They've been shuttling nesting materials to an artificial ivy plant, which was surprising since these birds are typically cavity nesters. It was about this time when they started building their nest last year.

A tray holding a whisk broom and upside down dust pan created a suitable cavity for these birds last year. I watched carefully until the birds were away, then I removed the pan to get the above shot last March. Four of their five eggs hatched and all four fledged on April 13.

Happy birding!
J.J.
Posted by The Backyard Birder at 1:28 PM No comments:


Be confident in using eBird as a tool to record your bird sightings with a free video class available from The Cornell Lab's Bird Academy. It takes about three hours to complete.

eBird is the largest biological citizen-science program, which gathers more than 100 million bird sightings each year. eBird can help you find more birds and keep track of your sightings. Collectively, these sightings are now empowering a global scientific community and helping answer pressing conservation questions.

These video tutorials will get you ready to confidently store and share your sightings with eBird.

Go to eBird Essentials to enroll.

Happy Birding!
J.J.
Posted by The Backyard Birder at 11:24 AM No comments:

Celebrate Valentine's Day with a long weekend of bird watching. The The Great Backyard Bird Count returns for its 22nd year this coming weekend, February 14–17, 2020. Count birds for as little as 15 minutes on one or more of the days of the GBBC from anywhere in the world, and help scientists get a snapshot of global bird populations.

Last fall, scientists reported a decline of more than one in four breeding birds in the United States and Canada since 1970, which makes keeping track of birds more important than ever.

Launched in 1998 by the Cornell Lab of Ornithology and National Audubon Society, the Great Backyard Bird Count was the first online citizen-science project to collect data on wild birds and to display results in near real-time.

Posted by The Backyard Birder at 2:57 PM No comments:

Birds are preparing for spring

It might still be winter, but birds are looking for potential nest sites.
Western bluebirds are known to go house shopping. The male shows his mate several nest sites, but the female is the one who makes the choice. She then places a small twig in the cavity or nestbox to stake her claim.

Birds also use the boxes as a roosting site in cold weather. So if you have a nestbox, make sure it's cleaned out and ready for spring.
Read more at Boxes serve as home to birds in the Orange County Register.
Happy birding!
J.J.
Posted by The Backyard Birder at 11:00 AM No comments:

Male turkeys are the gobblers

From Cornell Lab of Ornithology:

Male turkeys are called “gobblers” because of their famous call, which is their version of a rooster’s crow.  It’s a loud, shrill, descending, throaty jumble of sound that lasts about a second. Males often gobble from their treetop roosts, where the sound carries better than on the ground. They use it to attract females and in response to other males—sometimes one male’s call can lead to a group of others joining in. Both males and females cackle as they fly down from roosts, give very short, soft purring calls while traveling on foot, and give a long series of yelps to reassemble a flock after it has become scattered. Young turkeys whistle three or four times to locate the flock when lost.

To find wild turkeys it helps to get up early in the morning, when flocks of these large birds are often out foraging in clearings, field edges, and roadsides. Keep an eye out as you drive along forest edges, particularly areas with nut-bearing trees such as oak and hickory. You’ll usually find turkeys on the ground, but don’t be surprised if you run across a group of turkeys flying high into their treetop roosts at the end of the day.

According to the observations listed on eBird: The largest concentration of wild turkeys in Southern California is in San Diego County from Vista south to El Cajon and east to Anza-Borrego Desert State Park.

Happy Thanksgiving from The Backyard Birder!!

Posted by The Backyard Birder at 11:23 AM No comments: 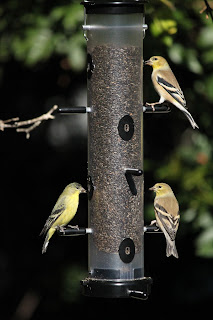 Grab your binoculars! If you have bird feeders, you're watching the birds anyway. So why not count them for science?

Project FeederWatch turns your love of feeding birds into scientific discoveries. FeederWatch is a winter-long (November-April) survey of birds that visit feeders at backyards, nature centers, community areas, and other locales in North America. Participants periodically count the birds they see at their feeders and send their counts to Project FeederWatch. Your bird counts help you keep track of what is happening in your own backyard and help scientists track long-term trends in bird distribution and abundance.

Counting for Cornell Lab of Ornithology's 2019-20 FeederWatch season begins on November 9 and runs through April 3.

For a $18 fee ($15 for Cornell Lab members), new participants receive the FeederWatch handbook and instructions with tips on how to successfully attract birds to feeders, an identification poster of the most common feeder birds, tally sheets and a calendar. Participants also receive Winter Bird Highlights, an annual summary of FeederWatch findings, and access to the digital version of Living Bird, the Cornell Lab's award-winning, quarterly magazine.

Posted by The Backyard Birder at 12:21 PM No comments:

Here's my latest column that ran in the Orange County Register and other Southern California News Group papers on Saturday, October 5, 2019.

A California native garden is a haven for birds and other wildlife. Indigenous plants have co-existed and evolved together with birds and pollinating insects over time, each depending on each other for survival and reproduction.

More than 600 bird species call California home. Even if you live in an urban setting, you can attract many species to your yard by providing a native habitat with a source of food and water.

“By creating an urban habitat, we can affect populations and diversity, one yard at a time,” said Mike Evans, co-owner of Tree of Life Nursery in San Juan Capistrano.

Layering tall, medium and low plants throughout the space affords shelter and protection from predators. Open areas are important for birds that scratch and forage for seeds. Open space also allows for viewing, and is therefore an important design principle, he said.

As a general rule, October is the best month to plant California natives. “The soil is warm, the weather is cool, and the rain is on the way,” he said.

Including plants that bloom at different times throughout the year will add color and variety to the garden. But the presence of winter berries has an even more important role: they help sustain a number of bird species through the colder months. Many birds change their eating habits in fall and winter. Some insect-eating birds will turn to berries as a supplement to their diets because their high-calorie content offers critical nutrients when insects are scarce.

Berries can also be magnets for winter visitors such as cedar waxwings, which travel in large flocks. These showy birds have been known to over-indulge on overripe berries that have started to ferment and become intoxicated, which causes them to fly erratically and crash into windows. White-crowned sparrows, which are mainly seed eaters, are also winter migrants to Southern California and will turn to fruit, including elderberries and blackberries.

In addition to supplying food, these dense shrubs are multi-functional. When planted as a border, they give birds a safe place to seek cover from predators. In the spring, dense shrubs also provide habitat for nesting. Flowering shrubs are also a nectar source for hummingbirds and other pollinators.

“A manicured, ornamental garden does nothing for wildlife,” Evans said.

But when you plant a California native garden, the space becomes a safe habitat for birds and other wildlife. And according to Jeff Bohn, co-owner of the Tree of Life Nursery: If you build it, they will come.

When Bohn recently purchased a new home, he removed the lawn, along with ornamental plants such as bird of paradise, and other non-native species. And he replaced them with California natives. “I was amazed how quickly towhees, phoebes, hummingbirds and lizards showed up,” Bohn said. “The other day, we had a rabbit in the yard, and I’d never seen a rabbit in the neighborhood before.”

Located along the winding Ortega Highway, Tree of Life Nursery contains 40 acres of natural habitat that borders Caspers Wilderness Park and functions as both a botanical garden and nursery center where guests can purchase plants to take home. The Casa La Paz gift shop on site offers books on plants, birds and butterflies, as well as inspirational books by authors such as John Muir.

The nursery hosts workshops on a variety of nature topics on Saturdays from 9:30 to 10:30 a.m. at 33201 Ortega Highway, San Juan Capistrano. Find the workshop schedule, plant lists, guides for planting and watering and other sage advice at californianativeplants.com, or call 949-728-0685.

Posted by The Backyard Birder at 9:03 AM No comments: 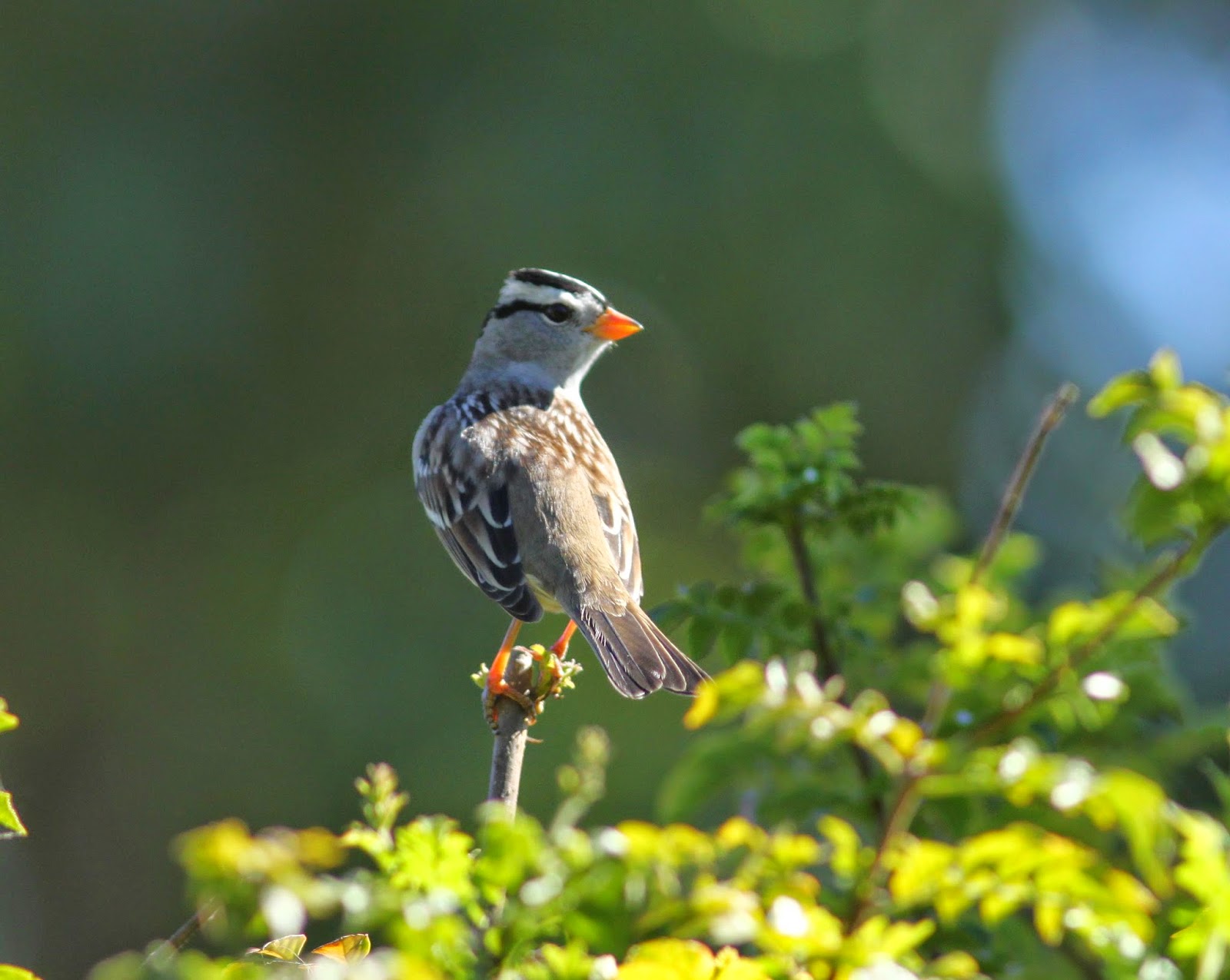